Père Jacques was born Lucien Bunel in 1900.  He was headmaster of the Petit Collège Sainte-Thérèse de l’Enfant-Jésus, where he  hid three Jewish boys and employed a Jewish teacher during World War II.  When the Nazis found out, they arrested him and the menon January 15, 1944 and set them to concentration camps.  Père Jacques was imprisoned in several Nazi concentration camps and treated very harshly because of the fact that he was a priest and that he had harbored the Jews.  He was  liberated by American troops at Mauthausen in early May 1945. Suffering from tuberculosis and weighing only 75 pounds, he died several weeks later.

Pere Jacques was named one of the “Righteous Among the Nations” by the State of Israel in 1985, as a non-Jew who risked his life during the Holocaust to save Jews.

The film Au Revoir Les Enfants was a film made and directed by Louis Malle in 1987, a student who at the age of 11 attended Père Jacques’ school and witnessed his arrest.  Although the film is about what happened that day and the weeks before, it is set with different characters, in another school.

On April 29, 1997, Père Jacques’ Cause for Canonization was opened.

This image is available on a note card, book mark and print.

There are no reviews yet. 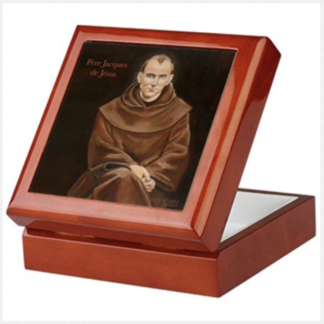